There will be a Camp for kickers only on December 16 at Kingdom Sportscenter in Franklin, OH. Go to upandthrough.com to download a flier.
Posted by Tim Williams at 4:44 AM 1 comment:

Up And Through joins NCS

It has been a very long time since I wrote on here. That is definitely going to change as I will have a lot to talk about. I am joining in with NCS, Natinal Camp Series. It is a network of kicking coaches across the country headed up by Michael Husted and Louis Aguiar. This is a great move for Up And Through. We will be hosting roughly 4 events a year in three different locations each year. Location are northern, central and southern Ohio. There will be more to follow very soon.
Posted by Tim Williams at 3:56 AM No comments:

Wow, what a day of College Football yesterday! I stayed up and watched the entire Nevada - Boise State game last night. The game was officially over at 1:53 am EST and it was worth every second. Of course I hate seeing kickers miss easy ones like Brotzman did for Boise State but it was sure fun to see Nevada make history and win. This really shakes up the BCS. If only Alabama could have played better in the second half last night they would have beaten Auburn. I am not a fan of Cam Newton. Sure, he is a talented young man, but there is way too much smoke for there not to be any fire as far as he is concerned. We do not need another Reggie Bush situation. The youth of America deserve more than another fraudulent player. If he is so innocent, I wish he or his father would just stand up and say what is so.
Anyway, today we celebrate another Special Day! It is OSU - Michigan today at 12 Noon on ABC Live from Ohio Stadium! I already have goose bumps thinking of what these guys have experienced this week and what they are feeling at this moment. I remember my first one was at Ohio Stadium as well. I slept maybe 2 hours that night even though the Hyatt on Capital Square in downtown Columbus probably had the most amazing beds I have ever been on. I am so excited to watch my man Drew Basil in his first year and the rest of the Buckeyes take the field and compete in this story book rivalry. I am not so sure Michigan has a chance in this game, but there have been plenty of those supposed lopsided match ups where the favorite gets beat. That is what you get with a rival game of this magnitude. Throw the records out the window! Play the game!!!!!
Posted by Tim Williams at 4:54 AM No comments:

Happy Thanksgiving to all! Enjoy the early morning parades, the football on tv, the food on the table, but, most of all enjoy each other. This is the one Holiday that makes me miss my Grandma Williams. She was all about Thanksgiving and the most amazing cook. She has been gone since 1985 but still has an unbelievable influence on me. That is about all I wanted to post this morning because that is what is on my mind.
I will add that the NFL games on today are terrible with the exception of Dallas and New Orleans. New England and New York will roll with no problem as Detroit and Cincinnati have no chance. For me the fun really starts tomorrow as Auburn goes to Alabama and Arizona plays Oregon. Then on Saturday "The Game" comes on at Noon. I hope to still have some leftover turkey and stuffing around for one of those amazing sandwiches!!!
OK, so go have a wonderful day everyone and eat as much as you possibly can!
Posted by Tim Williams at 6:12 AM No comments:

High school playoffs here in the state of Ohio have reached the Final Four. All but one that was mentioned last week are still in it. AJ Fleak and the rest of the team from Big Walnut got knocked out. Tim Carter of Watterson, JD Detmer from Hilliard Davidson and Andrew DiMario of the Alter Knights are all still in. Also allow me to mention that Kresimir Ivkovic of Mentor Lake Catholic is also still in. I apologize for leaving him out last week. Congrats to Krash!
As you all know, this is Michigan week. As a former Ohio State player it is easy to say that this week always felt like a one game season. Everything about it was different. Practices were always longer, more intense and full of surprises. Former players would fill the sidelines. TBDBITL (The Best Damn Band In The Land) would show up and allow us to partake in Script Ohio as we could pick any instrument we wanted. President Dr. Gee would come by and speak to us. It was always built up but never over done. You knew this week was special and it was special to be a part of. I am proud to be able to say I had the opportunity to compete in this storybook rival. It also pains me to this day to admit we did not beat Michigan once during my four years starting. We did tie in 1992 but as you all know, that's like a loss in itself. Although, I did perform pretty well in all the Michigan games. I believe I was 5-7 career in fg's against them with a long of 51 at the "Big House". Then there is the infamous punt to Desmond Howard in 1991. I started as the punter the entire year of '91 as well as kicking. He returned the punt 93 yards and then struck the ever popular Heisman pose in the end zone. The punt was supposed to go out of bounds 40 yards down the field but I ended up getting a hold of it as it went 47 yards to the bottom of the numbers with great hang. The rest is history. To me, it was an arrogant move on Desmond's part to strike the pose, but some people feel they have to do that little extra to try and show their self just a bit more. That kind of act burns me up. But it is also kind of sad. You see, I would never do something like that because I was raised better. Apparently, poor Des was not. We will just leave it at that. And.......Exhale! hahahahahaha
GO BUCKS!!!!!!!
Posted by Tim Williams at 3:37 AM No comments:

Well here we are in the middle of November and it feels like the football season just started. There has been so much that has happened this year and in such a short time. The BCS is going to get figured out really quickly here. The next two weeks will be very interesting. I still have a feeling that either Oregon or Auburn will lose one more. It will more likely be Auburn as they have Alabama and South Carolina left whereas Oregon has Arizona and Oregon State remaining.
It has been a crazy week for kickers. Mike Nugent is now out for the season. All our best to him as he is set to embark on a long winter of recovery. With that, Aaron Pettrey, former Buckeye, is signed to finish the season for the Bengals. Best of luck to you Aaron. Jeff Reed was released from the Steelers. He was such a main stay for them the last 9 years. Mark it down, he will be somewhere within 2 weeks. This is only just a few mix ups with kickers. There were more.
In the college ranks, we have several Upandthrough members doing well. Although he has not had many attempts and his team has only 3 wins, Jake Rogers has had a solid year so far. He will have as good of an opportunity as anyone to be playing on Sundays next year. Drew Basil, the kickoff specialist for Ohio State, was named Special Teams Player of the Week for his performance against Penn State. Drew has a bright future ahead of him as the Buckeyes place kicker as well.
On the High School side of things, there are still some Team Upandthrough members playing this week in the state of Ohio. Evan Berg of Kings High School and Andrew DiMario from Kettering Alter plays Friday night as does Big Walnut's AJ Fleak. Timmy Carter of Watterson plays Saturday along with JD Detmer from Hilliard Davidson and Marshall Newsome of Wayne. All of these young men have a chance to win the game for their team. They all bring something different to the table but all they bring is pretty special Best of luck to these gentleman.
That is all for today. Chat soon!
Posted by Tim Williams at 4:08 AM No comments:

It has been a long time since my last post. I will now be much more consistent with this. Here we are so close to the end of the regular season in College football. High School football is already in playoff mode. It seems that every year when September hits the rest of the year flies by.
We have had some outstanding performances this year from so many young men and women. Thats right I said women. Alana Gaither from Firestone High School near Akron, OH set the record for the longest field goal by a female not just in the state of Ohio but Nationally. We have other career performances as well. It seems this passed weekend was titled "Lets one up Coach Tim". I say that smiling of course. JD Detmer kicked a 58 yard field goal this passed weekend. That is 1 yard further than my longest. As well Caleb Keeton from my Alma Mater, Waynesville High School, kicked his 7th field goal of the year as they lost to Jonathon Alder in the first round of the OHSAA Playoffs. The most I had in a season in High School was 6, 3 times.
I am looking very forward to the rest of the season especially in College. Derek Dimke from the University of Illinois is having a fantastic year as well as Devin Barclay and Jake Rogers from a field goal perspective. We are also very excited to watch future stars such as Drew Basil, Ohio State and Carey Spear at Vanderbilt. Both of these young men start as Kickoff Specialists as TRUE FRESHMEN.
That is all for today. Have a great day and we will check back in tomorrow.
Posted by Tim Williams at 4:16 AM No comments: 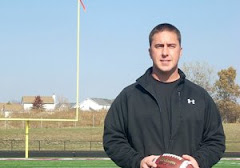